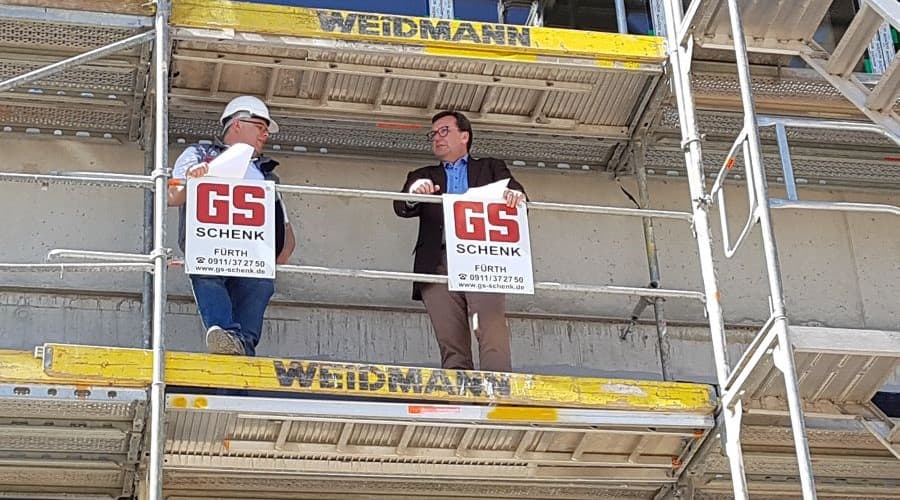 According to the old tradition, the builder and contractor Mr. Georg Schenk, invited construction workers, craftsmen from the participating companies, the architect and planners, to pay tribute to their accomplishments done so far.

On 4th April 2018 Mr. Erwin Urban opened the topping out ceremony with a speech. He thanked all involved planners, architect, craftsmen and the construction company for the work performed so far.
Particularly noteworthy is that the building could be built accident-free so far. And of course it is hoped that this will remain like this.

It is gratifying that so far it has been possible to keep the timeline as far as possible. For the further accident-free course, timely progress and well-being of the future users of the premises God’s blessing was requested.

Subsequently, the verdict was given by Mr. Müller from the GS company, also his words of thanks went to the client, architects, the company GS and their employees as well as all involved craftsmen and planners.
The speech ended with the wishes:

“Blessed be the whole house.

From hail, lightning and conflagration, God protects it with his favor.

The house may always be full of luck and peace”

Around 60 construction workers, planners and craftsmen accepted the invitation for coming together for refreshment.

A few facts and figures about the construction:

•52,000 m³ building volume
•4,000 cubic meters of concrete, for which around 600 concrete mixers had to be rolled up
•Prefabricated concrete with a span of 40 meters was a real challenge
•450 mtr. compressed air lines were laid
•Currently the paint shop is being installed
•It is worked at full speed on the completion of the new energy center with cogeneration plant

Previous
Back to the news selection
Next

We use cookies on our website. Below you can choose whether and if so, which non-essential cookies you wish to accept and receive further information on this.